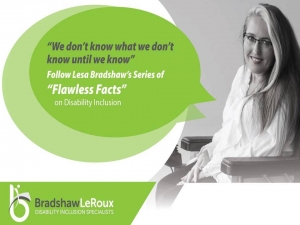 A Series of “Flawless Facts” by Lesa Bradshaw – Topic 6

With International Day of Persons with Disabilities coming up on 03rd December, many companies are mobilising to use this opportunity to raise awareness about disability as a value adding form of diversity to business. However the ‘go to’ thought is to achieve this via a ‘talk’ on Disability, where as guest speaker is invited to present on the topic. People tend to listen, and nod in agreement, but it is not often that a real, life-changing shift in perspective is achieved. The topic also gets frequently lost as it shares the limelight with World Aids Day and 16 Days of Activism.

So how about doing something different? What you want to do is to create a ‘buzz’ about disability inclusion which has a ripple effect beyond the boardroom. You want people to ‘see things different’, and to grasp how small changes in our actions and environment can create big impact to inclusion. So how about mobilising people in your organisation to experience the barriers facing persons with a disability first hand?

Our Experiential campaigns allow employees to ‘feel’ the impact of disabling barriers, whether they be barriers from the workplace infrastructure and environment, from the behaviours and reactions of their colleagues, from the lack of access to assistive technology, or from the standard procedures they usually follow to get work done. The objective of the campaign is to illustrate how ‘inclusive thinking and resulting actions’ can remove many of these barriers which then level the playing-field for persons with a disability to compete and succeed in the workplace. The impact of the campaign can be seen in the feedback sessions when employees begin to appreciate the skill and tenacity it takes for persons with a disability to live and succeed in a world which continuously fails to consider their needs – it challenges stereotypes, creates respect, and makes people ‘re-think’ disability as a value adding form of diversity.

But don’t take it from me … here are a few great comments from the participants of our recent campaigns:

“I was given a hearing impairment during the campaign … it was difficult to hear what people were saying and I had to ask them multiple times to repeat themselves or to talk louder. This could become frustrating for the other person, so I had to think about how to do it in a nice way. People chose to email or text to get their messages through to me.”

“Working on the computer with shaky hands is almost impossible. I locked myself out because I couldn’t get my password right. I also made multiple typing mistakes on the documents that I had to keep redoing. This slowed productivity down. People that encountered me during this experiment also didn’t know where to look when they saw my hands shaking. It seemingly made them uncomfortable. I also had to try keep my one hand stable with the other, in order to text on my cell phone.”

“My legs touched my desk when I was in the wheelchair, which was uncomfortable. Other than that, I was able to work fine at my workstation. Navigating around corners and through narrow doors required some skilled driving. The bathroom doors are also very narrow, and I realized that we don’t have a disabled toilet on our floor (although there is one on the ground floor). The hinges on some of the doors were a bit heavy, and it was a challenge trying to keep a door open and move through it at the same time. People reacted with shock and disbelief when they saw me in the chair. Some avoided me completely.”

“I work mostly on my computer and immediately tried to change the settings, so that the font size was bigger. It wasn’t the easiest task, because of the IT settings on our machines. I had to use the magnification tool to read the font on my screen, which is not ideal. We should be able to easily change the font size of our screens, or these provisions should be made for employees with visual impairments. Moving up and down the stairs was also a challenge, as I couldn’t tell where one step ended and the next began. It would be useful to have strips on the edges.”